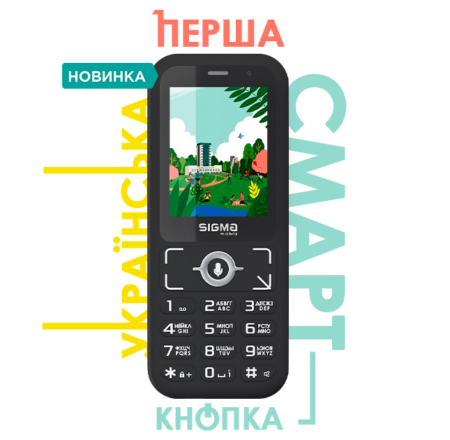 3 billions of people still have no Internet; the average smartphone costs $120 today and is not available to many people around the world. The KaiOS operating system is closing this digital divide and has invited well-known brands in the world, including Sigma mobile, to join the system and create original devices that will allow women around the world to start their own businesses, connected kids get better grades, real time data helps farmers increase revenue and output. We are the first in the Ukrainian market to offer our consumer a unique classic phone – X-style S3500 sKai with smartphone features for $40 only.

The phone is equipped with a powerful enough stuffing as follows:

Your phone is equipped with a KaiOS operating system designed specifically for push-button phones. Google’s pre-installed apps such as YouTube, Maps, Assistant, as well as Facebook and WhatsApp have long been familiar to all users of modern smartphones. For X-style S3500 sKai users, there is an ever-expanding app and games – KaiStore. That is, besides the usual phone and multimedia features, this phone also handles many smartphone features, such as receiving emails from Gmail and synchronizing with Google Calendar, and more.

So if for any reason you don’t use a smartphone or are a die-hard fan of classic push-button devices but want more functionality than your existing phone, look at the Sigma mobile X-style S3500 sKai.

Starting in the second decade of October, this phone will be available in all networks of the country starting at 999 uah.